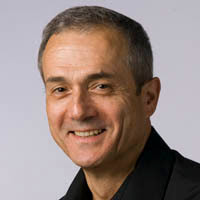 The Evolution Of Speed In Athletics:

Why The Fastest Runners Are 'Black' And Swimmers 'White'
Authors: ADRIAN BEJAN, EDWARD C. JONES &camp; JORDAN D. CHARLES
Here we explain a much avoided phenomenon in the evolution of speed sports for men and women: The world records in running tend to be set by black athletes and in swimming by white athletes. We show that this phenomenon is predictable from physics. Locomotion is a ‘falling-forward’ cycle, in which body mass falls forward and then rises again. Mass that falls from a higher altitude falls faster, down and forward. In running, the altitude (L1) is set by the position of the center of mass above the ground. In swimming, the altitude is set by the upper body rising above the water, and it is proportional to H – L1, where H is the height of the athlete. The anthropometric literature shows that the center of mass in blacks is 3 percent higher above the ground than in whites. This means that blacks hold a 1.5 percent speed advantage in running, and whites hold a 1.5 percent speed advantage in swimming. Among athletes of the same height Asians are even more favored than whites in swimming but they are not setting records because they are not as tall.
Keywords: animal locomotion, constructal, evolution, running, speed sports, swimming
Centre of gravity theory for dominance of 'black' sprinters and' white' swimmers
Scientists have tackled one of the taboos of modern sport and believe they have explained why black athletes sweep the medals in sprinting events, while white swimmers dominate in the pool.
By Matthew Moore Published: 7:30AM BST 12 Jul 2010
Foto Bold

Usain Bolt of Jamaica celebrates winning the men's 200m final of the athletics competition in the National Stadium at the Beijing 2008 Olympic Games Photo: REUTERS
This disparity in athletic achievement, obvious to Olympic viewers, throws up so many sensitive questions of race and human difference that it is rarely discussed in public.
But now two US academics have risked controversy by publishing a theory that attempts to explain the contrasting performance of black and white athletes using the laws of locomotion.
They argue that black sprinters have a 0.15 second advantage over their white rivals because they tend to have a higher centre of gravity, meaning they can fall to the ground more quickly between each stride.
Conversely, having a lower then average centre of gravity helps white swimmers because their speed is determined by the height they can get above water.
More of their upper bodies are above the waterline, so they can generate and ride larger waves.

Adrian Bejan, a professor of mechanical engineering at Duke University in North Carolina, and Dr Edward Jones of Howard University in Washington, used existing data on the body dimensions of soldiers of various nationalities to determine that black people – or more precisely those of West African origin – have a centre of gravity three per cent higher than white people.
Prof Bejan said the theory “completely accounts” for the increasing racial segregation of Olympic podiums.
The last 25 men’s 100m sprint world record holders have been black, while white swimmers have held the 100m freestyle world record since 1922.
“What’s a disadvantage in one medium is an advantage in another,” he said. “They are not competing on level playing fields.”
Prof Bejan conceded to The Daily Telegraph that he had “goose bumps and worries” about the publication of his study, and would deplore its exploitations by bigots.
But he said scientists had a duty to pursue research however controversial the conclusions. Dr Jones, the co-author of the paper, is an African-American.
Prof Bejan said: “It’s a physics paper, not an opinion paper. I urge other people to read what I’ve written and then safeguard against attempts to misuse it.
“I’m an observer of nature and I saw the pattern and had to analyse it.”
Previous attempts to explain sporting achievement along racial lines have fallen down on the success of East African long-distance runners, and the researchers concede that their theories of locomotion do not cover endurance events, only sports in which the goal is to achieve maximum possible speed.
Equality campaigners have always resisted attempts to suggest that particular races have inbuilt athletic superiority, claiming that medal trends are best explained by the popularity of different sports in different communities.
The lack of swimming facilities in Africa and black regions of the US have also been cited as a reason for white dominance of the pool.
Dr Jones conceded that cultural factors would always play a role in sporting success. He said: "When I grew up in South Carolina, we were discouraged from swimming."
"There wasn't nearly as much encouragement for us as young people to swim as there was for playing football or basketball."
The research is published in the peer-reviewed International Journal of Design and Nature.
What's the secret to running and swimming faster?
The position of your belly button, say scientists
By Daily Mail Reporter Last updated at 1:36 AM on 14th July 2010
Sports commentators have long avoided trying to explain why blacks dominate on the running track and whites often finish first in the swimming pool.
But scientists in America claim they have come up with a very simple explanation to defy the guardians of political correctness.
They say it’s all down to belly-buttons.

Dominant: Usain Bolt (right) wins the men's 100m final at the Beijing Olympic Games - his speed could be down to the position of his belly button according to a new study
In a study suggesting that navel gazing may not be such a waste of time after all, top US university professors claim it’s not important whether an athlete has an ‘innie’ or an ‘outie’ but where his or her navel is in relation to the rest of the body.
They say the belly-button determines the centre of gravity.
According to the report published yesterday in the International Journal of Design and Nature and Ecodynamics, black people’s navels are higher than whites.
That gives them a speed advantage on the track, said the study, but holds them back in the pool. 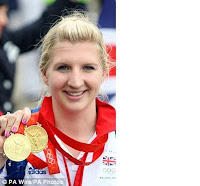 Double Olympic champion: White swimmers like Rebecca Adlington have an advantage because of their lower navels, according to the study
Given two runners or swimmers of the same height, one black and one white, ‘what matters is not total height but the position of the belly- button, or centre of gravity,’ claims Duke University professor Andre Bejan, the lead author of the study.
‘It so happens that in the architecture of the human body of West African-origin runners, the centre of gravity is significantly higher than in runners of European origin,’ which puts them at an advantage in sprints on the track, he added.
Blacks generally have longer legs than white athletes, which means their belly-buttons are three centimeters higher than whites', said Professor Bejan.
That means the black athletes have a ‘hidden height’ that is 3 per cent greater than whites', which gives them a significant running speed advantage.
'Locomotion is essentially a continual process of falling forward, and mass that falls from a higher altitude, falls faster, the professor explained.
In the pool, meanwhile, whites have the advantage because they have longer torsos, making their belly-buttons lower in the general scheme of body architecture.
‘Swimming is the art of surfing the wave created by the swimmer,’ said Professor Bejan.
‘The swimmer who makes the bigger wave is the faster swimmer, and a longer torso makes a bigger wave.
'Europeans have a 3 per cent longer torso than West Africans, which gives them a 1.5 per cent speed advantage in the pool,’ he added.
Asians have the same long torsos as Europeans, giving them the same potential to be record-breakers in the pool.
But they often lose out to whites because whites are taller, he explained.
Many scientists have avoided studying why blacks make better sprinters and whites better swimmers because of what the study calls the ‘obvious’ race angle.
But Professor Bejan said the study he conducted with Edward Jones, a professor at Howard University in Washington, and Duke graduate Jordan Charles, focused on the athletes' geographic origins and biology, not race, which the authors of the study call a ‘social construct.’
Professor Bejan is white, originally from Romania, and Professor Jones is black, from South Carolina.
They charted and analysed nearly 100 years of records in men's and women's sprinting and 100-meters freestyle swimming for the study.
Read more:
http://www.dailymail.co.uk/sciencetech/article-1294141/Whats-secret-running-swimming-faster-The-position-belly-button-say-scientists.html#ixzz0vA0ekYks