London 2012 - Qualifying procedure - Open Water Swimming
Info
Last Updated on Thu, 22 Sep 2011 09:56
- Qualifying procedure
- Qualifying Event: 9-10 of June 2012 - Setubal (POR)
- Test event: 13 of August 2011, Serpentine, Hyde Park, London (GBR)
fa click - aici
Note: the first 30 ranked swimmers (30 Men and 30 Women) from the FINA 10k Marathon Swimming Event to be held at the 14th FINA World Championships – Shanghai 2011 will be invited to participate by FINA. If a swimmer does not accept the invitation, then the place will be offered to the next ranked swimmer. All expenses to be covered by each participating NF.
José Mourinho will be the Ambassador of the “FINA Olympic Marathon Swim Qualifier”
Olympic Games
The President of the Portuguese Swimming Federation (and FINA Bureau Member) Paulo Frischknecht was on October 27, 2011 in Madrid (ESP) to meet José Mourinho, the coach of the local football club Real Madrid, who will be the Ambassador of the “FINA Olympic Marathon Swim Qualifier”, to be held on June 9-10, 2012 in the Portuguese city of Setubal. Frischknecht was accompanied by the Mayor of Setubal, Maria das Dores Meira, and gave to Mourinho the official shirt of the competition. This event will complete the list of the 25 men and 25 women eligible to compete at the 10km Marathon Swimming races at the 2012 Olympic Games in London (GBR).
Mourinho – a native from Setubal – promised to be present in “at least one of the two days of the qualifying event” and showed also a great interest in “following the main aquatic events during the Games time”. Paulo Frischknecht was also happy in associating this event with such a prestigious personality in the world of sport: “His presence and support will bring an added-value to success of this competition. His availability to be Ambassador of the ‘FINA Olympic Marathon Swim Qualifier’ was immediate, and will certainly be well appreciated by the entire aquatic family in Portugal”. 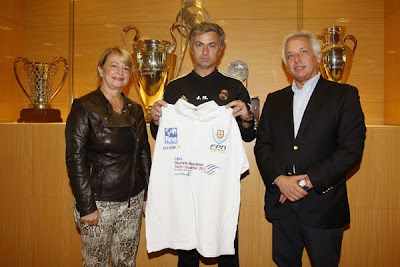